In Memory of
Henry
Johnson Jr.
1925 - 2018
Click above to light a memorial candle.
Memorial Candle Tribute From
Southern Mississippi Funeral Services
"We are honored to provide this Book of Memories to the family."
View full message >>>
Send Flowers
Plant a Tree In Memory of Your Loved One
Click Here
Menu

In the event that there is an error
in the information presented,
please contact the funeral
home by clicking here. 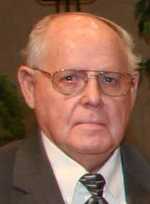 Henry Johnson, age 92, went to be with the Lord on June 23, 2018 after a lengthy illness. Born in Sharon, Mississippi, Henry was the youngest of 14 children of Henry and Annie Thompson Johnson. Henry spent most of his life in Laurel, MS before moving to the Gulf Coast. Henry was a member of Wildwood Baptist Church in Laurel. He served in the Army during World War II and was stationed in Italy. Henry was the recipient of several citations for his courageous service, including the EAMETO Ribbon with three Bronze Stars, Good Conduct Medal, and the World War II Victory Medal. A welder/pipe fitter by trade, Henry retired from Ingalls Shipbuilding. Even at the age of 92, Henry's mind was still very keen. He kept up with current events and sports. His grandchildren and great-grandchildren held a very special place in his heart.

In addition to his parents, Henry is preceded in death by his wife of 67 years, Frances Hanberry Johnson, son-in-law, Joseph Hightower, and his thirteen siblings.

Funeral services will be held at 11:30 am on Friday, June 29, 2018 at Southern Mississippi Funeral Services with Rev. Murphy Dale Young officiating. The family will receive friends from 10:30 am -11:30 am prior to the service. Interment with military honors will follow at 12:30 pm in Biloxi National Cemetery.

Share your memories and send condolences to Mr. Johnson's family at www.smfs.us

To send flowers to the family of Henry Johnson Jr., please visit our Heartfelt Sympathies Store.