To share your memory on the wall of Donald Plowman, sign in using one of the following options:

Donald was a lifelong resident of Biloxi. He proudly served in the United States Air Force for 2... Read More
Donald V. Plowman born January 17, 1937 in Weatherford, TX, passed away Tuesday, August 18, 2020 from a long battle with dementia in Biloxi.

Donald was a lifelong resident of Biloxi. He proudly served in the United States Air Force for 22 and a half years in the fields of Photography and Electronics. He was faithful and very active in church up to the last few years of his life as a Sunday School teacher and Children’s Bible Drill Leader. He was a Scout Troop Leader when his children were of age. His hobbies were Amateur Radio Operator (WA5FDP), print-press work, computers/electronics, woodworking, and tinkering on anything and everything. He was known by the community, churches, schools, and family during the Christmas season as “Santa”, and an excellent one at that.

He was preceded in death by his parents, Leon and Mary Plowman; and his brothers, L.E. Plowman Jr., J.V. Plowman, and Rea Plowman.

We would like to extend a special thank you to all of the staff and caretakers at Brookdale Biloxi and Southern Care Hospice for the extraordinary efforts and care received during his declining days.

Due to the circumstances of our nation, we will be having a private Funeral Service. Service will be held at Lutheran Church of the Good Shepherd, Pass Road in Biloxi on Monday, August 24, 2020. Interment will be at the Biloxi National Cemetery.

“By the grace of God I am what I am”, 1 Cor. 15:10. Donald’s stance on life was, “that he was no longer
walking aimlessly but now I walked with Jesus by my side. I had a purpose.”
Read Less

To send flowers to the family or plant a tree in memory of Donald Verdell Plowman, please visit our Heartfelt Sympathies Store.

We encourage you to share your most beloved memories of Donald here, so that the family and other loved ones can always see it. You can upload cherished photographs, or share your favorite stories, and can even comment on those shared by others. 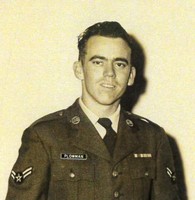