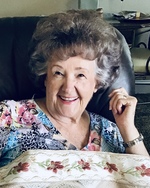 Carolyn Sue (Morrow) Johnsen, age 78 and a resident of Pascagoula, died peacefully while surrounded by family at home on Friday, October 2, 2020. Carolyn was born on April 23, 1942 in Sebastopol, MS. She was the daughter of Mrs. Rhudell Sistrunk Morrow and Mr. Clyde Alton Morrow and sister of Larry Morrow.

Mrs. Johnsen and her late husband, Donald Joseph Johnsen, married on November
25, 1970 and had seven children altogether. The couple owned and operated Johnsen’s Outboard and Engine Service on Market Street for 42 years. She was a devoted member to Bethel Assembly of God Church in Pascagoula, Mississippi for many years. Later, she found her church home at Church of His Presence in Daphne, Alabama. Carolyn, also known as “Mawmaw J”, was loving, caring, charismatic, and welcoming towards everyone she met. Her door was a revolving one, welcoming anyone and everyone into her home. Whether it was to
have breakfast, have coffee, or talk, Carolyn was always there for everyone. She was a friend to many, and always put her family first.

Private visitation will be held on Tuesday, October 6, 2020, from 9am until 10am at Southern Mississippi Funeral Services, 6631 Washington Avenue in Ocean Springs. Graveside service will immediately follow at 11am at Biloxi National Cemetery.

In lieu of flowers, the family requests that memorial contributions be made to Gideons International Processing Center, P.O. Box 97251, Washington, DC 20090-7251.