To share your memory on the wall of Richard Sandefer, sign in using one of the following options:

Print
Richard “Rick” McCleish Sandefer, a native of Baton Rouge, Louisiana, retired lawyer and resident of Biloxi, Mississippi passed away on Friday, March 27 at Gulfport Memorial Hospital. He was 73.

He is survived by his long-time comp... Read More
Richard “Rick” McCleish Sandefer, a native of Baton Rouge, Louisiana, retired lawyer and resident of Biloxi, Mississippi passed away on Friday, March 27 at Gulfport Memorial Hospital. He was 73.

He is survived by his long-time companion and friend, Frances Holland of Biloxi, Mississippi; his daughter, Shea Sandefer Hill and her husband Thomas Blake Hill; and two grandchildren, Kathleen Julia Hill and Dexter McCleish Hill, of Houston, Texas. He was preceded in death by his parents, Isaiah Alexander Sandefer, Jr. and Blanche McCleish Sandefer; his sister, Alexandra “Sandy” Sandefer Reed; and his son, Richard Weston Sandefer.

Born on July 14, 1946 in Baton Rouge, Louisiana, Rick was a swimmer and football player at Baton Rouge High School, graduating in 1964. He attended Louisiana State University and was a member of Kappa Sigma Fraternity. During his junior year at LSU, he volunteered to serve in the United States Marine Corps during the Vietnam War. He trained at Camp Pendleton and left for Da Nang in July 1968, assigned to the 3rd Battalion, 5th Marines, India Company, 60 MM Mortars Division. He spent most of his time in Vietnam in combat and was wounded during Operation Meade River in December 1968, suffering severe burns when his transport helicopter was shot down. After several weeks in the hospital in Japan, he was assigned to the Marine Corp base in Barstow, California as an MP where he served out the remainder of his duty. He received a Purple Heart and a citation for bravery under fire before being honorably discharged as Lance Corporal in July 1969.

During a furlough in March 1969, he married his college girlfriend, Kathleen Jackson of Coushatta, Louisiana and they had two children together. During their marriage, he returned to LSU and graduated from law school in 1973 and worked as an attorney for the Louisiana Department of Transportation and then in private practice. He always loved the ocean and bought a small, wooden sailboat they took to Grand Isle often. The marriage ended in 1975 and Rick moved to Lafayette.

He had a private law practice and married Carole Howard. It was during his years in Lafayette that he fully realized his passion for sailing and joined friends on racing teams, traveling the Gulf Coast to as many yacht clubs and regattas as he could manage.

After the marriage ended, he moved back to Baton Rouge briefly and until retirement, when he fulfilled his dream of living on the water, buying a sailboat and moving to Point Cadet Marina in Biloxi, Mississippi. There he eventually met Frances Holland, a Fraserburgh, Scotland native, and they shared his final 21 years together, working on the boat and the house, spending time with friends, traveling, and taking care of their cat, Mia. Frances stayed by his side until the very end.

Richard, Ricky, Rick, Dad, Popeye, Pop – all names he has had over the years. All who knew him will remember his wit and gift for entertainment. He was a renowned story-teller. In addition to sailing, he cultivated many interests over the years including taking photos, building furniture, reading and writing. He was a real character and a true Southern charmer. His philosophy on life might best be summed up in a quote he inscribed on an antique compass he gifted to his granddaughter on her 1st birthday - “To a good and proper course hold fast and at those times when the way is unclear, trust in and reckon by the compass that resides within your heart. - Popeye”

The family asks that in lieu of flowers, donations be made in his memory to Disabled American Veterans or to the charity of your choosing. A memorial service will be planned and announced at a later date. Please share any stories or memories of Rick on his Memory Wall on smfs.us.
Read Less

There are no events scheduled. You can still show your support by sending flowers directly to the family, or planting a memorial tree in memory of Richard M Sandefer.
Plant a Tree

We encourage you to share your most beloved memories of Richard here, so that the family and other loved ones can always see it. You can upload cherished photographs, or share your favorite stories, and can even comment on those shared by others.

Posted Apr 25, 2020 at 12:10pm
Rick was one of the most intelligent and witty people I've ever had the privilege of meeting and knowing. He always had an anecdote for every situation and most of his memorable witticisms cannot be repeated here. I admired and respected him and I will miss knowing that he's in the world. I think he'd have a good laugh at all the tender memories and praise. He was a self-effacing, jolly good friend. May God grant Shea and Frances peace in knowing how much joy they brought to him.
Sherry LeBlanc
Comment Share
Share via:
TS

Posted Apr 06, 2020 at 01:20pm
RIP RICK! WHEN WE ATTENDED BRHS, WE HAD SUCH GREAT FUN! LAUGHTER WAS JUST THE RIGHT THING TO DO!
GOD BLESS YOU AND ALL YOUR FAMILY, AND VERY CLOSE FRIENDS! YOU WILL BE DEARLY MISSED!
FAREWELL, TAM ROMANS STRESAU
HOUSTON, TX
Comment Share
Share via:
LW 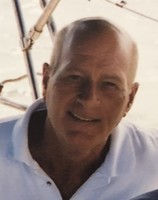