To share your memory on the wall of Arlin Richard, sign in using one of the following options:

Arlin was born during the Great Depression on February 26th, 1938 to Abdon Pierre Richard and Lucille Lorenza Cannette. He grew up in a small one-room house on St. Martin road with his parents and nine siblings. He was the last surviving member of this hardy group, preceded in death by his mother and father, his brothers; Alton Richard, Veryl Richard, Jerry Richard, Abdon Richard Jr. and James Larry Richard; and sisters; Vivian Toncrey, Gloria Husley, Gladys Schmierer, and Shirley Groue.

His humble beginnings and large family instilled in him an unbreakable work ethic and a deep commitment to the meaning and value of family.

Arlin met the love of his life in high school, Lorna Gay Demoruelle. He was smitten from the start, attending his high school prom with her and making certain to share every dance with her. He even took to writing her a love letter using a typewriter, which was pretty high tech at that time, and for those who know Arlin , he wasn’t much for new technology. In fact, that may be the fanciest device he used up until his family convinced him to get a flip phone almost 50 years later.

Arlin and Lorna married on September 26th, 1958 and he was her loving provider and protector for 62 years of marriage up until his death. Arlin and Lorna had four children, sons; Arlin Richard Jr. and James Richard; daughters Rachel Mosher and the late Roxanne Miller. Throughout those six decades, they encountered both successes and hardships together, and the one constant foundation through it all was his driven devotion to do whatever necessary to provide for and support his wife Lorna, his children, grandchildren, and great-grandchildren. He was a fixture at every ballgame, every birthday, every graduation, every fish fry, and every wedding. Loving and supporting his family meant everything to him. If it was an important day to them, then it was an important day to him, and he would be there. Even on his last day, his only concerns were that his wife Lorna be taken care of when he was gone and that his children, grandchildren and great-grandchildren knew that he loved them.

Arlin served in the Army National Guard and worked for nearly forty years as a plumber and pipefitter. When he wasn’t working for someone else, he was working on something else. Fixing cars, building birdhouses, collecting wood, cutting grass, or repairing roofs to name a few.

When he wasn’t working, he could usually be found fishing, and he even worked at that by running his own shrimp boat the “Queen Bee” for some time. He had a love for the water, and some would say a sixth or seventh sense on how to catch fish. He spent many a day on the water over his lifetime in his various boats and made a sizeable dent in the trout population along the Gulf Coast, passing that love and knowledge down to his children and grandchildren.

Arlin was the patriarch of his family and will be sorely missed but his legacy will live amongst them forever.

A mass of Christian burial will held on Wednesday, October 14, 2020 at 11:30 am at Sacred Heart Church. Friends may visit one hour prior. Interment will follow in Bosarge Cemetery. Southern Mississippi Funeral Services in charge of arrangements and honored to serve the Richard Family.
Read Less

To send flowers to the family or plant a tree in memory of Arlin Anthony Richard Sr., please visit our Heartfelt Sympathies Store.

We encourage you to share your most beloved memories of Arlin here, so that the family and other loved ones can always see it. You can upload cherished photographs, or share your favorite stories, and can even comment on those shared by others.

Posted Oct 15, 2020 at 03:22pm
Sending Prayers and Our Deepest Condolences to The Richard Family. So Very Sorry for Your Loss.
Sincerely,
Teri & Jake Setnikar, and Family🙏🏻🙏🏻🙏🏻
Comment Share
Share via:
MR

Posted Oct 14, 2020 at 01:55pm
We are so sorry to hear of the passing of our classmate. Due to the virus, we are unable to attend the services.
Byron & Maxine Walden Ramsay
Comment Share
Share via:
LM

Blooming Garden Basket was purchased for the family of Arlin Richard. Send Flowers 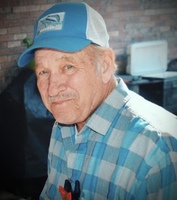